We are proud to announce that APEX Suspension is an official sponsor of the Dutch Dakar Press Team, one of the support vehicles that will be participating in the 2022 Dakar Rally. The 2022 edition of the Dakar Rally will be held in Saudi Arabia.

The Dutch Dakar Press Team has been participating in the Dakar since 2004. During that time, their team has employed professional photographers from around the world to capture the essence of the Dakar in absolutely striking images. In order to get the pictures they need, the Dakar Press Team of course needs to participate in the rally along with 300 other vehicles. This year, they are using three specially prepared Volkswagens: an Amarok Dakar Proto, an Amarok V6 and a T6 4Motion Xpedition. The T6 Xpedition is equipped with APEX’s very own Heavy Duty springs.

About the Dakar Rally

The Dakar Rally is named after the town of Dakar, which is the official finish line of the original Paris-Dakar Rally that was held from 1979 to 2008. From 2009 to 2019, the event was moved to South America due to security concerns in Mauritania. Since 2020, the entirety of the Dakar rally takes place in Saudi Arabia. The race is open to both amateur and professional entries. Due to the incredibly difficult and demanding nature of the rally, finishing the event (regardless of position) is considered a worthwhile achievement.

This year’s event will be held in Saudi Arabia from 2 – 14 January 2022. For more information, visit dakarpress.nl, dakarpress.com & dakar.com. 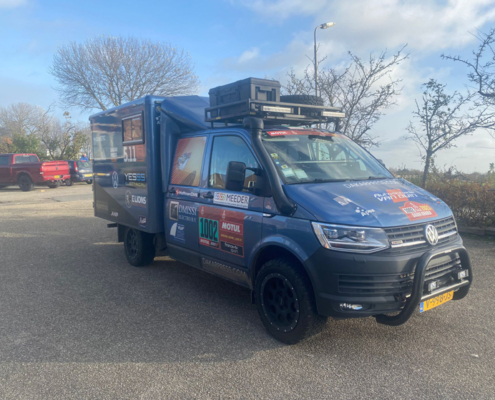